Completing our mini-trilogy of looking back at a few classic cars, we conclude today with the Ferrari Daytona, officially known as the Ferrari 365 GTB/4. 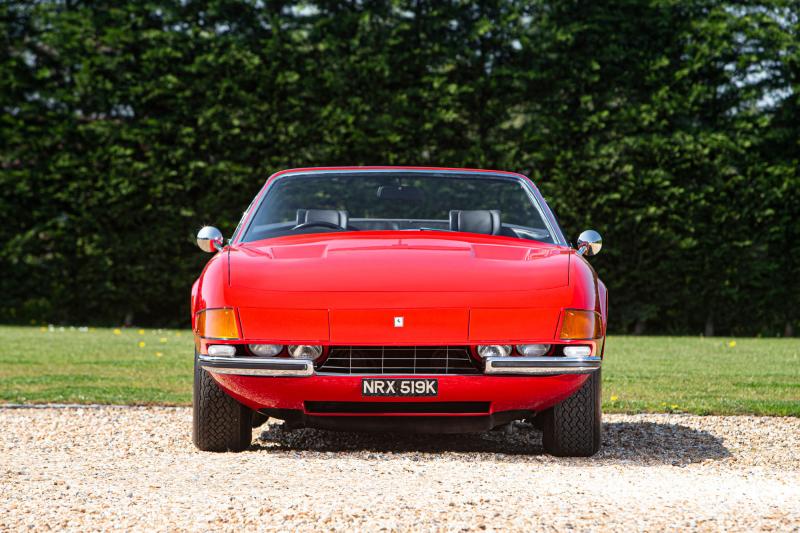 This classy sports car has a 4.4 litre Colombo V12 engine with a 5-speed manual transmission, and a front-mounted engine and rear-wheel-drive.

The Daytona name was "unofficially" reported to have been given to the car by the media rather than Ferrari to commemorate their 1-2-3 finish at the 1967 24 Hours of Daytona race. Still to this day, Ferrari rarely actually call the car the Daytona, preferring its real name of the 365 GTB/4.

The Daytona is capable of a top speed of 174 mph and has an acceleration of 0-60 mph in 5.4 seconds. The American version had a few modifications but was, in general, the same spec. Again a Pininfarina designed car, the 365 GTB/4 was quite different in that the normal rounded design of Ferrari was replaced with a more sharp-edged style.

The Daytona also gained its fame when it was driven (and won) the inaugural Cannonball Baker Sea-To-Shining-Sea Memorial Trophy Dash in 1971. With an average speed of just over 80 mph, the car completed the New York to L.A. event in 35 hours 54 minutes, showcasing the car's potential for high-speed travel over a long distance.

It also appeared on the cover of a 1973 album by popular American 70's duo The Carpenters. In the first two seasons of Miami Vice in the 1980s, a replica version was used (which Ferrari later sued for!) after which it was replaced by an actual Ferrari Testarossa donated by Ferrari from season three onwards.

As recently as 2004, the Daytona was voted top sports car of the 1970s by Sports Car International magazine, further adding to its legacy and iconic status.

So, if you want to buy or view one, what are your options? We have three dealers that might be able to help you.

First up, we have Talacrest, the world's number one classic Ferrari dealer located in Berkshire, and worthy of contacting whether you wish to buy or sell a classic Ferrari. With many models available, they currently have a 1971 Daytona Ferrari Spyder conversion, complete with all records and converted in 1978. This immaculate car is in Ferrari red and needs to be seen. For more details just click on the link below.

A second dealer we should mention is once again Joe Macari Performance Cars London. Offering cars for sale, service, restoration and storage, they currently have a 1969 Ferrari Daytona Plexi for sale. After spending a few years in a Danish collection, this classic right-hand-drive vehicle is now back in the UK and available. Check out more details below.

So there we have it, the 365 GTB/4 completing our brief trilogy of looking back at classic and iconic cars. To discover more of these hidden treasures or to sell or buy the classic car of your dreams, then keep up to date with all of the news and posts on our website at Classic Motors For Sale.

The 50s decade was a great time for the bike industry with many new models emerging that would go on to become classics. With economic improvement on the rise after World War II, the manufacturers beg...

The classic car auction industry continues to grow, both as major events and as online auctions, so here we take a look at a selection of major auctions that will be taking place during the first quar...