When the name Rowan Atkinson comes up most people usually think of the character "Mr Bean" and his citron-green British Leyland Mini 1000 Mark 4. In reality, the automobile world of the actor and Oxford University graduate who played Mr Bean, and several other notable characters, is somewhat different indeed!

Over the years, Rowan Atkinson has become a very serious classic and supercar enthusiast, driving most of the cars he owns (or has owned) and also participating in club track days and major events such as the Goodwood Revival.

In this article, we take a brief look at just a few of the cars he has owned and some of the history behind them.

Probably his most famous acquisition was the McLaren F1 that he bought in 1997. Despite crashing this car on two occasions, with the latter smash resulting in Britain's largest-ever insurance payout for car repairs at just over 900,000 GBP, he was still able to sell it for 8 Million GBP in 2015. 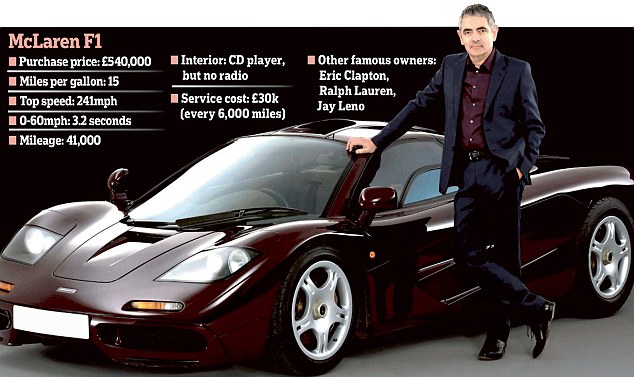 Another vehicle he owned and later sold, again after crashing it and spending a fortune on repairs, was a very rare Italian-styled V8 Zagato Aston Martin. However, this classic was sold at a loss at auction after all of the repair work!

One car that he has bought and sold on more than one occasion is the Mercedes 500 E. He bought his first in 1993 but sold it a year later, then in 2017 he purchased another only to sell that one too in 2018.

He was also the proud owner of a 1964 Ford Falcon Sprint but crashed this one during the 2014 Shelby Cup race at the Goodwood Revival.

One of his more recent buys was a limited edition 2014 Bentley Mulsanne Birkin, a car named after a famous straight on the Le Mans circuit.

One of the oldest cars in the collection is quite possibly his 1939 BMW 328, a very significant car from that era and winner of the Mille Miglia road race, which he has had meticulously restored to perfection.

The oldest car in his collection, in terms of personal ownership, must certainly be his 1977 Aston Martin V8 Vantage which he bought in 1984 and has kept ever since (and even used it in one of his Johnny English movies too!).

Quite surprisingly he has never owned a Porsche and has no desire to. Even though he likes these cars, he feels that he is not quite the "right kind of person" to own one.

So as you can see, Rowan Atkinson is indeed a classic and supercar enthusiast with very diverse taste, and a person that truly likes to drive the cars he owns rather than just store and display them. He will no doubt buy and sell many more in the coming years so his collection will constantly be in a state of coming and going, never remaining static – just like his character Mr Bean all those years ago.