Regarded as one of the world's most significant and valuable automobiles, the 1936 Bugatti Type 57SC Atlantic is extremely rare, with only 3 known to exist. Each one was distinct and originated from the 1935 Bugatti Aerolithe Electron Coupe that featured at the 1935 Paris auto salon.

The Bugatti Type 57 range, which included the very rare Atlantic, was designed by Jean Bugatti, the son of founder Ettore. Just over 700 examples were produced between 1934 and 1940, but it is the elusive and very expensive 57SC Atlantic that we are looking at today.

Lightweight in its construction, with a low appearance, a powerful engine capable of a top speed of 123 mph, and with the ability to do 0-60 mph in 10 seconds, many consider this to be the ultimate in the Bugatti collection and the first supercar ever made – quite some statement. 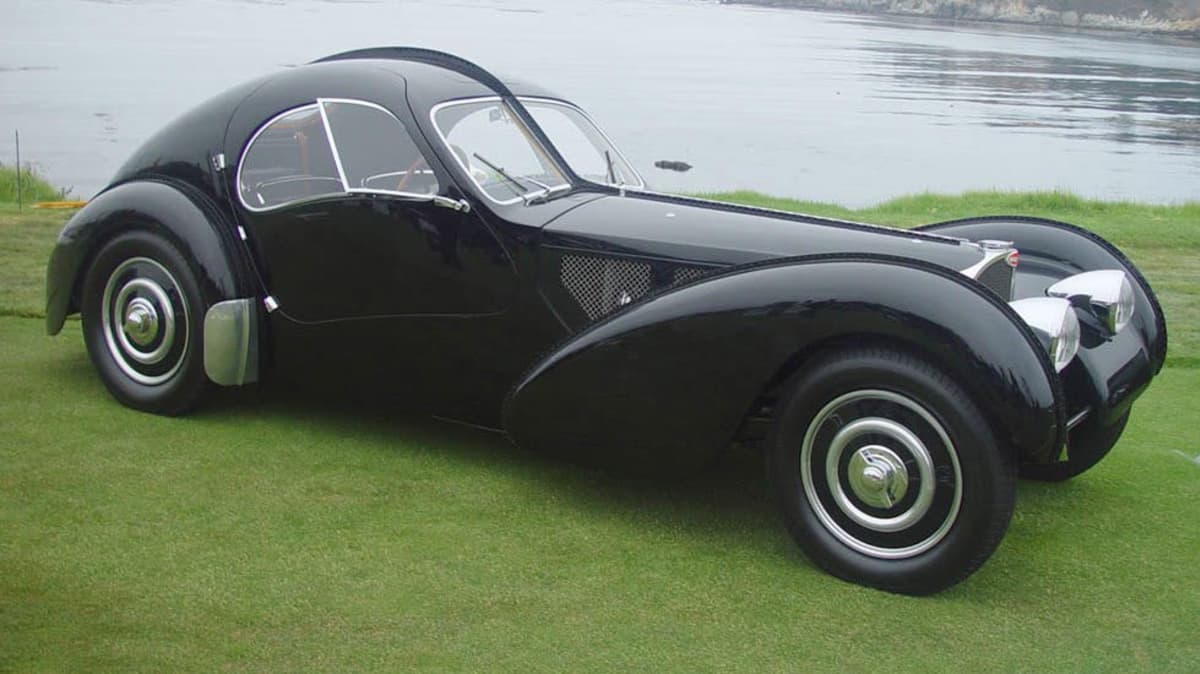 The design was a mix of aircraft-style and tear-drop shape, including a raked windscreen, and kidney-shaped doors with matching windows. Electron was used in the construction, being one-third the weight of aluminium and very strong. However, being very flammable it was not possible to weld any of the panels, so they were all riveted into place, and ultimately the appearance of the rivets was incorporated into the design of the car, as can be seen on the wings – a true combination of function and form.

The original prototype is long gone, but three Atlantics produced remain, with two of the three remaining largely original. 2022 sees them reach the fine age of 86 years old, and these Atlantics are both rare and very valuable.

The first production Atlantic was made to order in light blue with a dark blue interior. Over the years, and with several different owners, it changed quite considerably in appearance, especially in colour. In 1971 it was purchased at auction for $59,000 USD and restored to its original 1936 specification, and later went on to win the best in show at the 2003 Pebble Beach Concours. Since then, it has been purchased by a new owner for a huge sum of $36 million USD and is believed to reside in an automotive museum.

The second to be produced remained in France and unfortunately was involved in a terrible collision with a train in 1955. Sadly, the passengers were killed and the chassis remained at the train station for many years, eventually being sold to a junkyard! It was discovered and over the years has been restored, eventually making an appearance at the 2010 Pebble Beach Concours d'Elegance in a grey colour.

The third of the trio is probably the most widely seen and likely to be the most original. Its external headlights make it very recognizable. Ralph Lauren has owned this car since 1988 and it underwent restoration by Paul Russel. With chassis number 57591, it is proudly displayed as one of the highlights of the Lauren car collection. The original car was produced in Sapphire Blue, but Ralph Lauren had it painted black during the two-year restoration, as are many of his cars. The car still has its original registration of EXK6 from 1936 and won best of show at the 1990 Pebble Beach Concours d'Elegance.

There is a mystical fourth model out there somewhere too, as yet to be discovered, bearing chassis number 57453. It is believed that if this car were to ever be found, it could well be worth a staggering amount in excess of $114 million USD – now that would be some barn find!