The Fiat X1/9 was a bold move for the Fiat company in the early 70s. The Italian corporation was about to introduce a wide range of new models and wanted to make sure the world was paying attention. Who better than Marcello Gandini (the man who designed the Lamborghini Countach), to make sure the world was watching? Gandini was designing for Bertone, and this was his Autobianchi A112 Runabout concept car, brought to production. In the early 70s, the wedge shape was in vogue, and the X1/9’s speed boat inspired b-pillars, and an arrow-shaped nose set the styling apart. US safety regulations were hinting at the demise of the convertible and the X1/9s targa roof and stiff structure were engineered with that in mind.

Released in November of 1972, the little Fiat was an exotic mid-engine sports car, at an entry-level price. It had an all-aluminum overhead cam engine designed by Aurelio Lampredi (the famed Ferrari engine designer), four-wheel disc brakes, and an all-independent suspension. The 1300 motor was not powerful but loved to be revved, and the handling was stellar. It was foot-to-the-floor, no matter the road. Fiat got its wish and there were numerous publications with an X1/9 sliding through corners on the cover. Production would continue with Fiat until 1982 when it moved to Bertone until 1989.

This specific 1982 Fiat X1/9 VIN #ZFABS00A1C7146535, is number #1 of the 300 Versione Specials for 1982. These limited editions were built to celebrate production leaving Fiat and moving to its designer, Bertone. Bertone created these special editions, requesting the two-tone metallic paint, alloy wheels, red leather seats, and steering wheel. They all came with a body-color Targa roof and rear defroster. If the original X1/9 of the 70s was funk, then this X1/9 had gone disco. The colors aren’t bright like the early cars, but the two-tone paint scheme and subtle pinstripes show off every angle and the ribbed red leather seats look straight out of a Kubrick movie. Ten years in production saw many improvements, including a 5-speed gearbox, fuel-injected 1500 motor, interior updates, and a higher-quality interior. This car has all those updates as well as the special features of the Versione Special.

This example is stunning and still looks like a prototype came to life. We believe the paint to be mostly original, with the noted exception of the driver’s door which received a minor touch-up that was not accident-related. The interior is all original and the Blaupunkt stereo was dealer installed when new. This X1/9 was originally purchased for $11,496 at Suburban Auto Imports in Oak Park Illinois by an amateur basketball player in 1982 and it stayed with him until we acquired it last year. The owner was 6’6” and had to wedge himself into the cockpit. As he got older, the contorting became more and more difficult and the car was driven less and less. This explains why there is only a little over 9k on the odometer as it stayed in the garage and was cherished for the entirety of its life. The story goes that the owner saw the car on the dealership floor, and knew he had to have it, even though he didn’t fit and had to drive it home with his shoes off.

Upon our acquisition of the car, it was treated to a no expense spared service at Auto Europe in Birmingham, MI. All the fluids were changed, new brakes, hoses, tires, and all systems checked. Today, it feels nimble, modern, and quick. It feels and looks like the low mileage car it is. The steering is precise, and it shifts smoothly through all the gears. The fuel-injected motor starts easily and feels more powerful than the 67 bhp it is rated at. The top speed is 106 mph and the car is comfortable and at ease on modern roads.

All these years later, it still gets the world to stop and take notice. Included in the sale is the original window sticker, original purchase agreement, dealer certificate, original odometer statement, original Rusty Jones rust-proofing paperwork, Blaupunkt paperwork, as well as the original owner’s manuals and Blaupunkt stereo manual. The car also comes with the targa top bag. 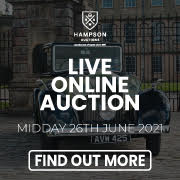